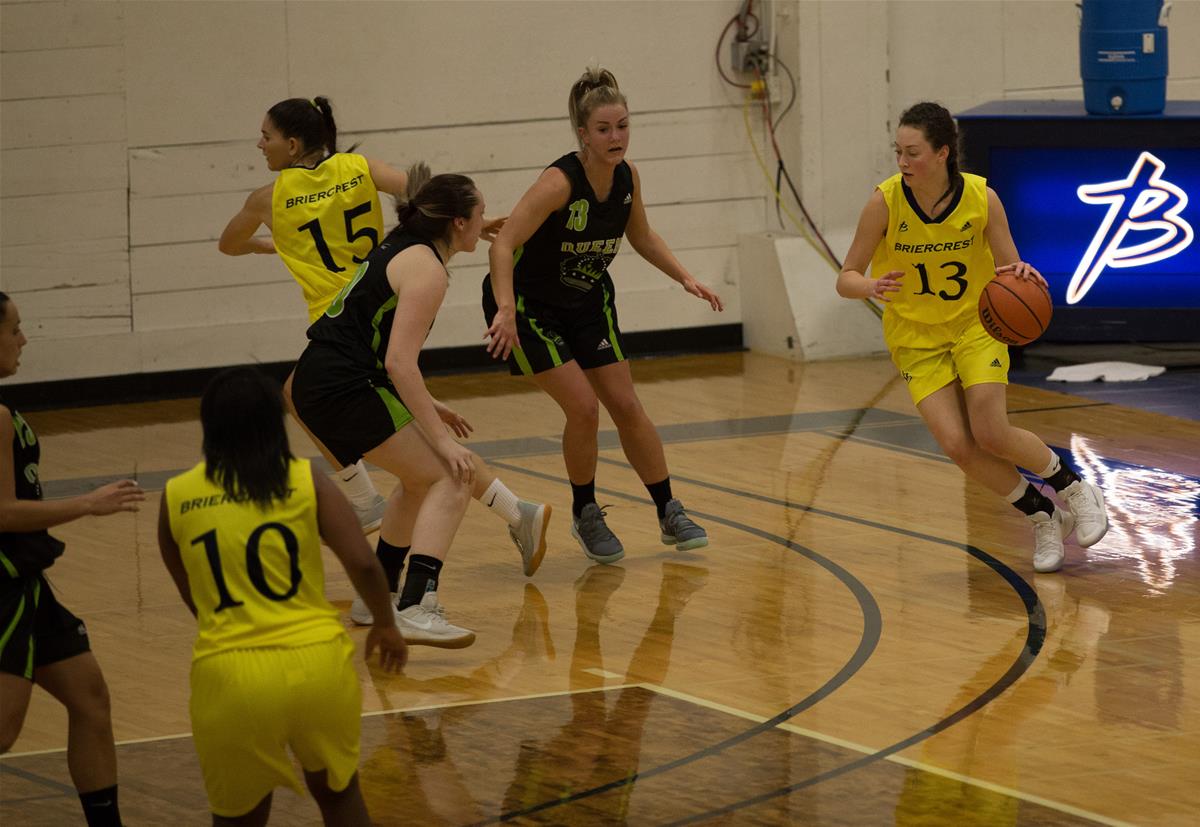 Briercrest kicked off their men’s and women’s game Saturday, January 13th coming in with a win for the women’s team, and a loss for the men’s team the previous Friday. Both teams played Ambrose Friday, and again Saturday with the Briercrest women winning 70-61, and the Ambrose men winning 74-57.

The Saturday games started off strong in the first quarter for the women as they gained a two-point lead. Ambrose player, Katie Nutini, sustained an injury in the 1st quarter but quickly recovered and was back on the court to make a free throw that put her team at 16-14. Both teams displayed high energy levels heading into the second quarter.

The women started their second quarter with a lay-up made by Briercrest player Kai Wyatt, but Ambrose took the lead with 22-19. Briercrest came back with a 27-24 lead when Kai Wyatt scored a three-point jump-shot near the end of the quarter. The quarter ended with Briercrest leading 37-28.

As the Briercrest women headed into the third quarter, they kept their lead with the help of Moriah Williams and Kai Wyatt who consistently made their lay-ups and free throws. The Ambrose women, Caitlyn Hetrick and Katie Nutini, helped their team gain points by nailing their free-throws and shots as well. The women finished their quarter with Briercrest heading into the fourth quarter with 53-40.

The men’s team started off with Ambrose taking the lead with two points. Both Briercrest and Ambrose advanced and displayed thoughtful strategy, but Ambrose pushed through the first quarter and finished it off with a 21-11 lead.

The men’s second quarter began with Ambrose player Artez Scharer scoring a jump shot, putting his team at 23-11. Briercrest players Thomas Neustaedter, Brian Tolentino, and Dominick Otteni stood out as they made many turnarounds and baskets and advanced their teams. Ambrose continued to make baskets and steals, leaving them on top at 37-29 by the end of the quarter.

Ambrose continued their lead into the third quarter with Josh Daniel and Carlos Bantaya making most of the baskets and putting them at 50-34 lead by the middle of the quarter. Briercrest players Thomas Neustaedter and Kyle Helsloot lead by example for their team by shooting the majority of the shots in the quarter. Ambrose, however, kept their strong lead and with 60-39 points.

Briercrest player, Brennan Gardner, scored the first shot of the fourth quarter assisted by Dominick Otteni. Ambrose kept their strong lead using their strategy as well as skill, and emerged with a 21-point difference. Ambrose remained steady in their baskets and won the game 74-57. Ambrose’s player of the game was #5, Josh Daniel, with 19 points, 5 rebounds, 5 assists, 2 steals, and 1 block. Briercrest’s player of the game was Briercrest newest recruit, #7 Dominick Otteni, with 14 points, 5 rebounds, 5 assists, and 2steals.