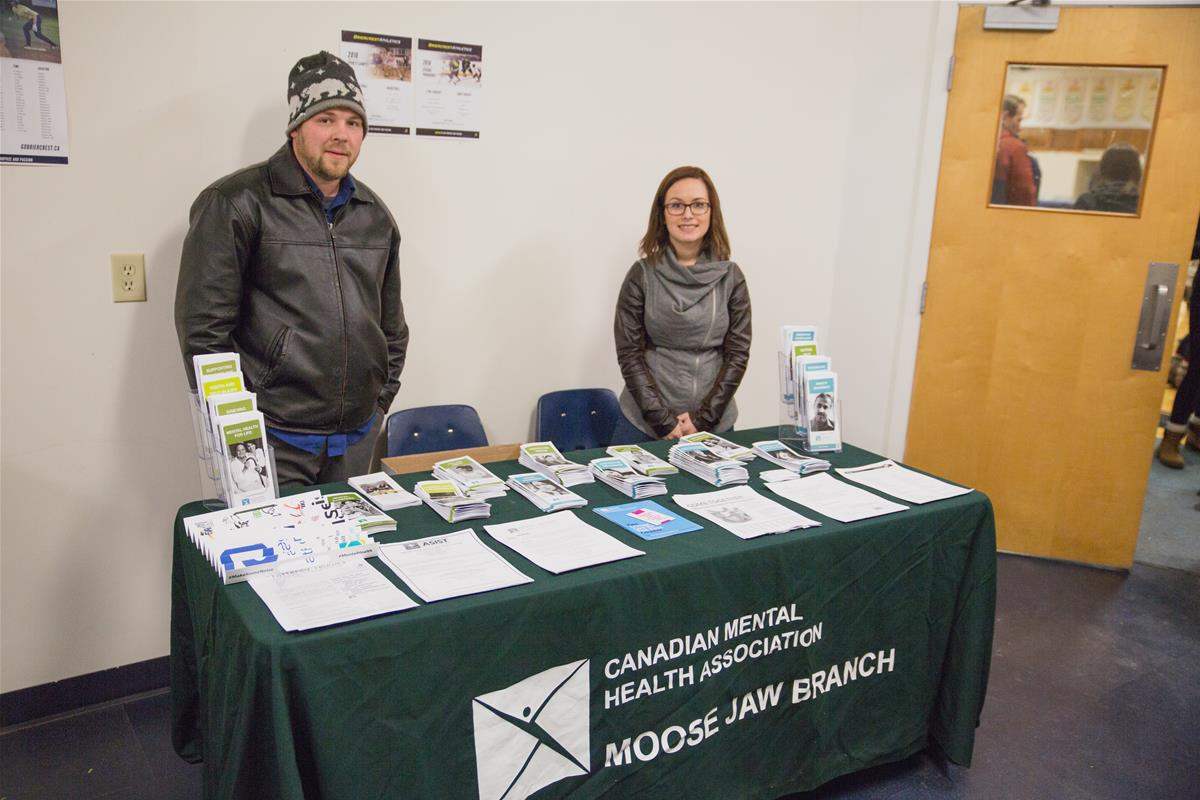 Students at Briercrest College and Seminary have been making some noise lately in an effort to promote mental wellness.

Perhaps none more than Lauren Deklerk, a member of the women’s basketball team.

On her own initiative, Deklerk began researching mental health issues among athletes, talking not only to fellow Briercrest students but also to students at other schools in the ACAC (Alberta Colleges Athletic Conference) league.

What she discovered is that it’s not part of the sports culture to ask for help with mental health issues. Now she hopes to change that by helping to build a stronger relationship among athletes, encourage them to speak up - make some noise, if you will - and improve the environment so that athletes can help themselves.

Briercrest College and Seminary took a step towards that goal Feb. 5 and 6 as students were encouraged to come out and “Make Some Noise for Mental Health” at men’s and women’s basketball games and men’s hockey games hosted by the school.

Jadon Frank, the Athletic Business Coordinator at Briercrest College and Seminary, said the Make Some Noise idea originated at SAIT (Southern Alberta Institute of Technology) in 2015 as a means to help reduce the stigma of mental health among post-secondary athletes. Frank, a member of the marketing committee for ACAC league teams, said the program was a huge success and the league decided to adopt it for all schools in the league this year. Athletes from all the teams at each school produced videos (local ones available on the Briercrest website) and basically got the conversation rolling allowing students to speak up about mental health issues and de-stigmatize it within the school.

The program focuses on using athletes to spread the word because “athletes play a prominent role at the school.” Frank said there are about 450 people at Briercrest College and about 108 of them are involved in team sports. Athletes are perceived to be confident “have ‘swagger’, if you will,” said Frank so it helps other students to know that, just like everyone else at the school, athletes can have issues with mental wellness.

Frank said when the idea was put before the athletes, “they were really excited to get involved, they all jumped on board.”

Margaret Clarke, director of counselling and health services at Briercrest College and Seminary, said having the cooperation of athletes has made getting the word out easier.

Like every other student group at the school, athletes can suffer from anxiety – the leading cause of mental health issues among Canadians.

As Frank points out, Briercrest students are constantly dealing with issues from making good grades to budgeting limited finances to relationship problems and everything inbetween.  And athletes have the added pressure that stems from finding time for practises, games and the ups and downs of performances on the court or on the field

Student Stephanie Pauls agrees there is a lot of stress for students attending post-secondary school.

“There’s a lot of stress in general that people deal with but many try to deal with it all themselves. It’s seen as normal to deal with, but often the stress goes unaddressed.”

Pauls said Briercrest offers all kinds of counselling for those students who choose to get help. And she said social media provides a good outlet to discuss problems.

“I think our students are really quite comfortable with accessing our services.”

But to make sure they are reaching out to a wider audience, her office began offering “mental health first aid” courses this year for coaches, teachers and others who work with the students to help them know what to look for with regard to mental health issues in those students they work with every day. She helps them to look for signs of struggles and how to talk to those they think need help. Then she took it a step further and led a course for students to act as peer counsellors to identify and encourage students dealing with mental health issues to seek help.

“We want to create an awareness and lessen the stigma related to mental wellness. I definitely think we are (making strides). There is a great opportunity because the students are still young. It’s a great time to get help now rather than struggle with it for years.”

Nicole Hebert, a University of Regina student doing her practicum at Moose Jaw Mental Health, manned a booth at the basketball games Friday night and said some students expressed interest in all the programs the Moose Jaw branch of Canadian Mental Health Association has to offer. It helped that Hebert enjoys her career path.

“I am very passionate about community involvement and getting as many people as possible aware of mental health issues.” She said “communities” involve groups of people with common interests, or basically, groups that look out for each other and communicate well among themselves.

She enjoyed the opportunity to reach out to post-secondary students but feels the need to talk should begin even younger.

“Personally, I think we should be talking to students in all schools (including the youngest grades in elementary schools). We are learning that children as young as age three can suffer from anxiety.

“In high school, students are learning what (they) like and don’t like and then if they go off to university, they find it’s totally different from what they are used to. Some need help to deal with the anxieties involved.”

Hebert credits the Bell Let’s Talk Day as creating a lot of buzz about mental health. But she says it has to go beyond that one day. This year, she says it helped that Canada’s prime minister, Justin Trudeau, went on television to discuss his involvement with mental health issues in his own family. “Sometimes, people in power can make it a shared issue,” she said.

She said mental health issues “have been a private topic for years. Now that it’s beginning to come out, we need to figure out how to filter all the information and get it out to people.”

She said the Make Some Noise weekend is a great start “and it will only grow from here.”

Speaking again for herself, Hebert said she thinks the de-stigmatization has improved quite a bit and more people are talking about issues. “But more employers are going to have to get onboard. They have to understand it’s a lot better to (embrace it) than to ignore it.”

Briercrest College and Seminary offers services to its students and staff. People outside of the college can contact Donna Bowyer, director of the Canadian Mental Health Moose Jaw Branch, for help or more information at (306) 692-4240.