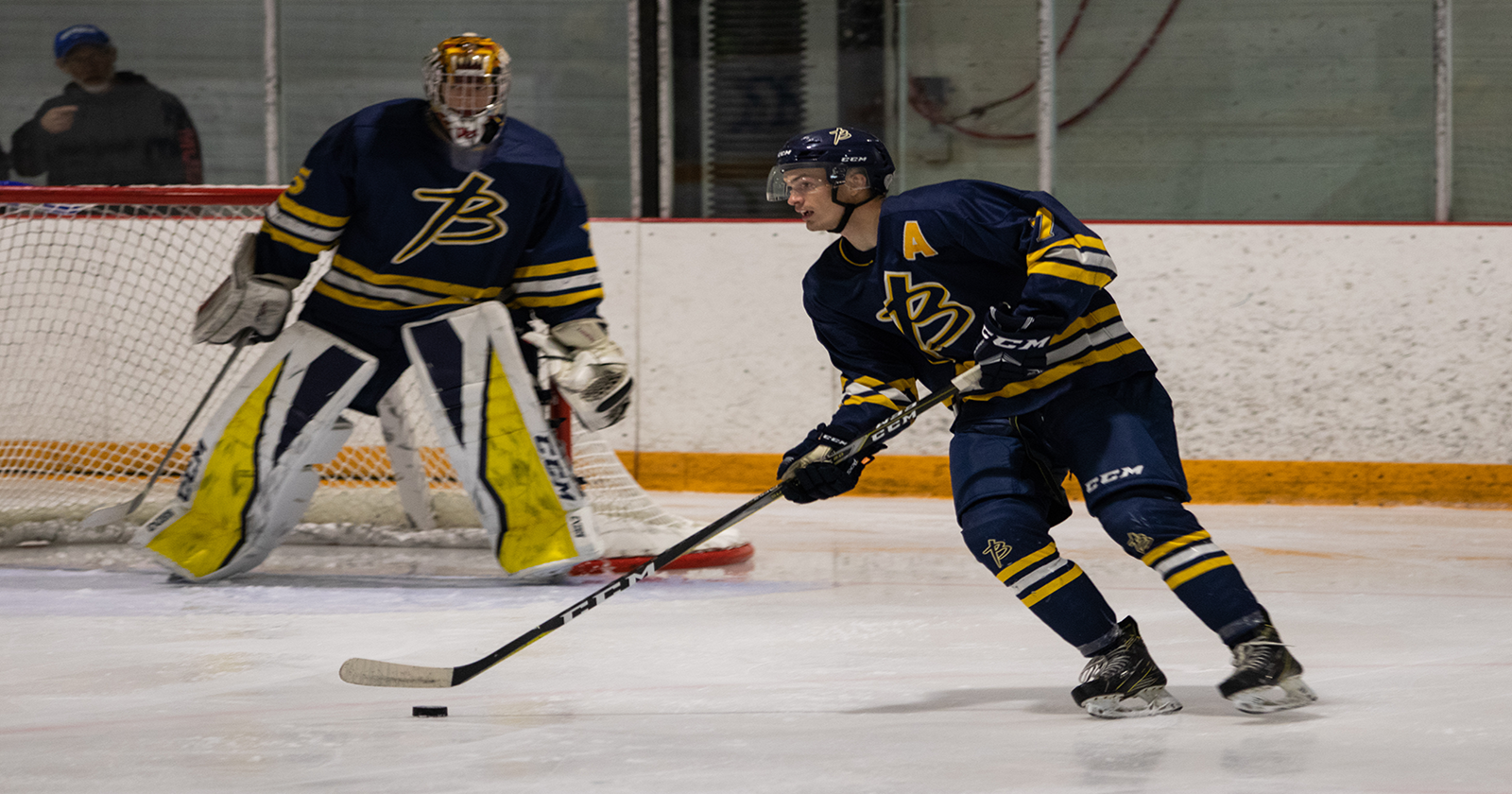 CARONPORT, SK - The Briercrest College Clippers face off against Portage College Voyageurs on Friday night at the Barkman Arena. This is the first league game against Portage; with two-exhibition games prior both ending in a 3-2 win for Portage. Portage College taking the win 4-1; #40 Dan Dekoning; Briercrest goalie and player of the game saying "[Briercrest] battled hard, giving up with a couple tough ones at the end; but looking to reset and come ready to play tomorrow"

The 1stperiod started off with Briercrest and Portage coming out of the gates hard and fast, both teams with tremendous scoring opportunities. First penalty called on Portages #4 Holden Daley for tripping 3:04 into the game. Portage was able to kill of the penalty and get back to even stretch, but not for long; a holding call on #24 Colby Livingstone at 6:23. Briercrest was on the power play, but then a call on them; Hooking on #20 Russell Olsen at 7:16. Almost halfway through the first period, still no goals on the board for either team. Next two penalties called on Briercrest; #7 Josh Mitton for charging at 9:30 and hooking for #19 Josiah Frieson at 16:25. Portage with the last penalty of the period at 19:24, second one of the game for #4 Holden Daley 2 minutes for hooking. End of the first, no goals for either team, shots on goals 15 for Portage and 9 for Briercrest

The 2ndperiod started with Portage short handed, back to full strength at 1:24; then a power play at 1:33 after a boarding call on Briercrest player #20 Russell Olsen— his second of the night. Briercrest is able to kill penalty time until 2:23; Portage gets interference call on #24 Colby Livingstone making it a 4 on 4 game for less than a minute. #20 Russell Olsen gets his third of the night penalty for hooking at 6:08. Briercrest is able to get a couple great short-handed shots, but Portage Goal #31 Taryn Kotchorek is able to keep the score board 0-0. Briercrest goal at 10:32 into the second by #2 Ryan Laird, assisted by #20 Russell Olsen; making this a 1-0 game Briercrest. Briercrest interference penalty for #21 Cale Kindrachuk for hooking at 11:52 into the second, Briercrest was able to kill the penalty off but Portage's #27 Ryan Symington was able to put one in the net at 13:57, assisted by #18 Logan Nachtegeale and #21 Trevor Posch. The game tied up 1-1 with 6:03 left in the second period. Some more penalties handed out to both teams; Portage #21 Trevor Posch for high sticking at 14:17, Briercrest too many men served by #26 Zachery Loewen at 16:17 and Portage's #20 Aaron Beauchamp for tripping at 17:04. The second period concludes a very penalty heavy period tied 1-1; shots on goal 25 for Portage, 23 for Briercrest

The last period of the game start Portage short handed again, #17 Dane Auchenberg 2 minutes for unsportsmanlike handed out at the end of the 2ndperiod. Briercrest #14 Austin Kozluk get a hooking call at 15:19 and Portage is able to take the lead during a power play at 16:53 scored by #21 Trevor Posch assisted by #24 Colby Livingstone and #10 Eli Jarvis. Portage gets a roughing call on #9 Kyle Rosolowski at 17:42. Briercrest pulls goalie with 1:30, trying to tie it up, but Portage is able to sink 2 empty net goals at 19:07 and 19:55; making the score 4-1. Three penalties are handed out at 19:50; Briercrest #18 for slashing, Portage #20 and #10 both for roughing. Game concludes 4-1 for Portage, 41 shots for Portage and 35 shots for Briercrest/

The player of the game from the Briercrest Clippers was goalie #40 Dan Dekoning, and #21 Trevor Posch for Portage College Voyageurs.