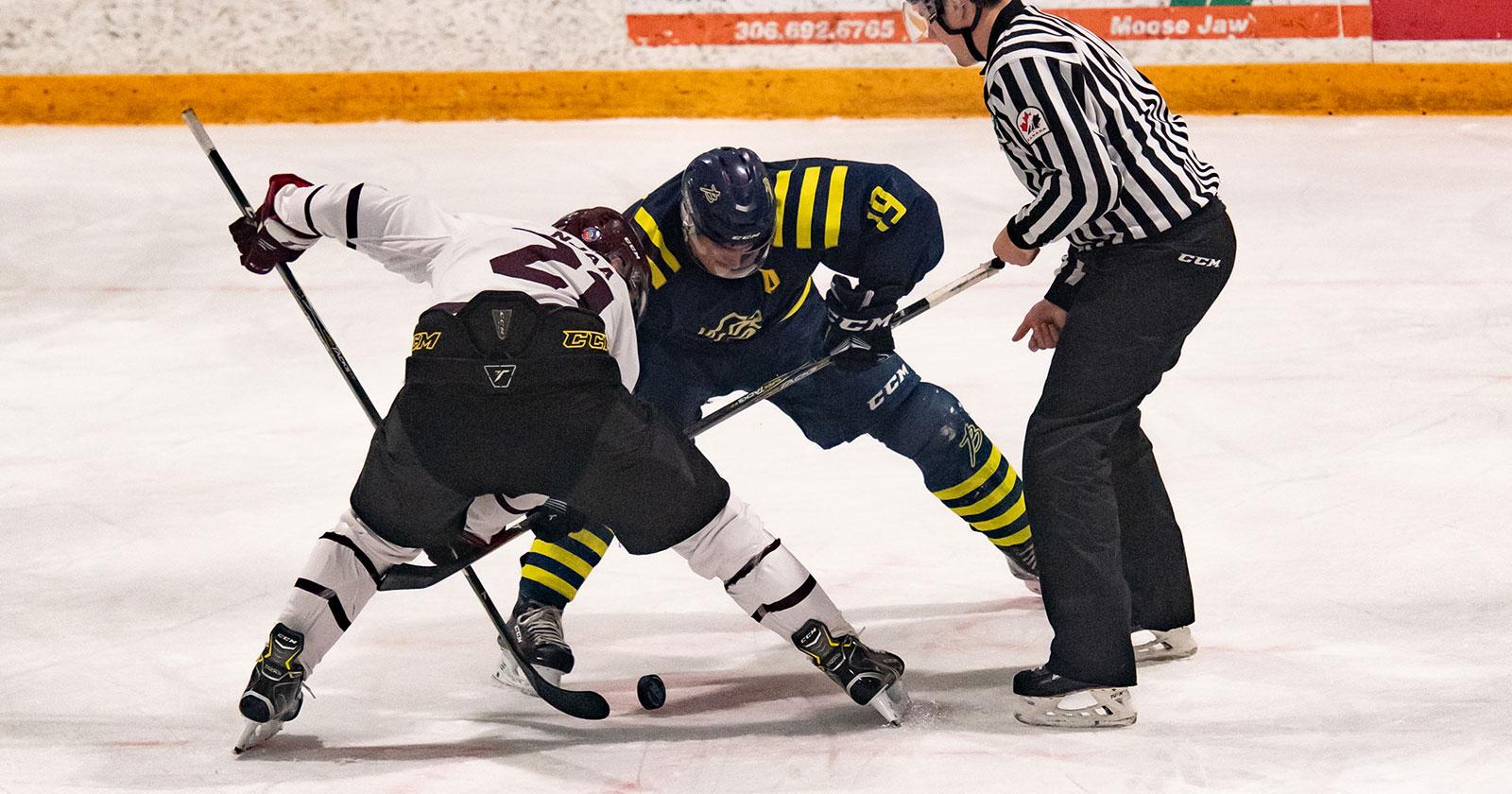 The Briercrest Clippers faced off against the NAIT Ooks for the second matchup of the weekend on Saturday afternoon at Barkman Arena. Briercrest taking the 2-1 win over NAIT Friday evening.

The 1st period started with NAIT flying out of the gates hot and scoring at 1:20; goal by #2, assisted by #13 Tyler Robertson. Briercrest working hard to tie things up but NAIT is able to extend the lead at 3:47 with a goal by #16 Jarid Hauptman assisted by #21 Brayden Harris and #18 Jake Mykitiuk. First penalty of the game goes to NAIT player #20 Devon McAndrews, 2 minutes for slashing. Briercrest tries to use this power play opportunity but NAIT is able to dominate and keep possession to kill the penalty off. NAIT scores yet again at 9:12— scored by #20 Devon McAndrew, assisted to #25 Dylan Stewart and #8 Jesse Roach, making it 3-0 for NAIT. Briercrest received a 2-minute boarding call on player #14 Austin Kozluk at 11:29, and another penalty at 16:40 on #44 David Hooper 2 minutes for holding. Giving NAIT player #13 Tyler Robertson a power play opportunity to score at 17:29, assisted #21 Brayden Harris and #18 Jake Mykituk . NAIT receives two penalties before the end of the 1st period; #8 Jesse Roach for crosschecking and #27 Jordan Davis for hooking. The 1st concludes 4-0 for NAIT, shots on goal 12-6 in favour of NAIT.

The 2nd period started with NAIT on the penalty kill. NAIT is able to kill off the penalty and sinks another goal in the net at 8:57— scored by #2 Austin Pickford, assisted to #26 Shane Fraser and #12 Ryan Piche. They are able to score a sixth goal at 10:08, scored by #21 Brayden Harris and #20 Devon McAndrews. Briercrest and NAIT get coincidental penalties at 13:52, Briercrest #14 Austin Kozluk, 2 minutes for roughing, and #2 Austin Pickford, 2 minutes for covering the puck with his hand, #2 Austin Pickford also receives a 4-minute sportsman’s like at 13:52. NAIT gets a short handed goal at 16:02, scored by #13 Tyler Robertson, assisted by #16 Jarid Hauftman and another goal at 18:05, scored by #12 Ryan Piche, assisted by #23 Matt Dykstra and #22 Connor Vermeulen. NAIT sinks another goal quickly at 18:21 scored by #21 Brayden Harris, unassisted. Briercrest gets a penalty late in the period at 19:11, 2 minutes for high-sticking on #15 Dawson Atamanchuk. The 2nd period concludes with NAIT leading 9-0, shots on goal 19 for NAIT and 16 for Briercrest.

The 3rd period begins with Briercrest on the penalty kill, and quickly after getting back to full strength, Briercrest gets a 2-minute elbowing penalty on #11 Sam Lawson at 2:30. NAIT uses the power play opportunity and scores at 4:14, #10 Tanner Dunkle assisted by #5 Curtis Roach. Briercrest receives a 2-minute roughing penalty at 3:35 to player #21 Cale Kindrachuk, and NAIT receives a 2-minute roughing penalty at 6:41 to #20 Devon McAndrews. NAIT scores five more goals in the 3rd period; #26 Shane Fraser scores unassisted at 9:27, #16 Jarid Hauftman assisted by #18 Jake Mykituk and #12 Ryan Piche at 12:32, #21 Brayden Harris scores assisted by #18 Jake Mykituk and #22 Connor Vermeulum at 15:24, at 16:40 #10 Tanner Dunkle scores assisted by #13 Tyler Robertson and #17 Brandon Ralph, and the last goal was scored quickly after that at 16:53 by #13 Tyler Robertson and assisted by #10 Tanner Dunkle. Both Briercrest and NAIT receive roughing penalties at 13:24, Briercrest #11 Sam Lawson and NAIT#26 Shane Fraser. Briercrest is able to get a last minute goal at 19:35 and close the gap a touch; scored by #14 Austin Kozluk, assisted by #16 Adrian Nicholas and #28 Blayd Anholt. The 3rd period concludes 15-1 for NAIT with shots on goal 53-18 in favour of NAIT.

Player of the game for the NAIT Ooks, with three goals and two assists #21 Brayden Harris and for the Briercrest Clippers with one assist #28 Blayd Anholt. When Briercrest player of the game #28 Blayd Anholt was asked about what happened in [Saturday’s] game versus Friday night, he said “[NAIT] made adjustments to the way [Briercrest] was attacking [Friday], [Briercrest] didn’t clean up the d-zone compared to [Friday]”, he added that [Briercrest] would try to regroup and be prepared for the upcoming game against Portage College Voyagers.