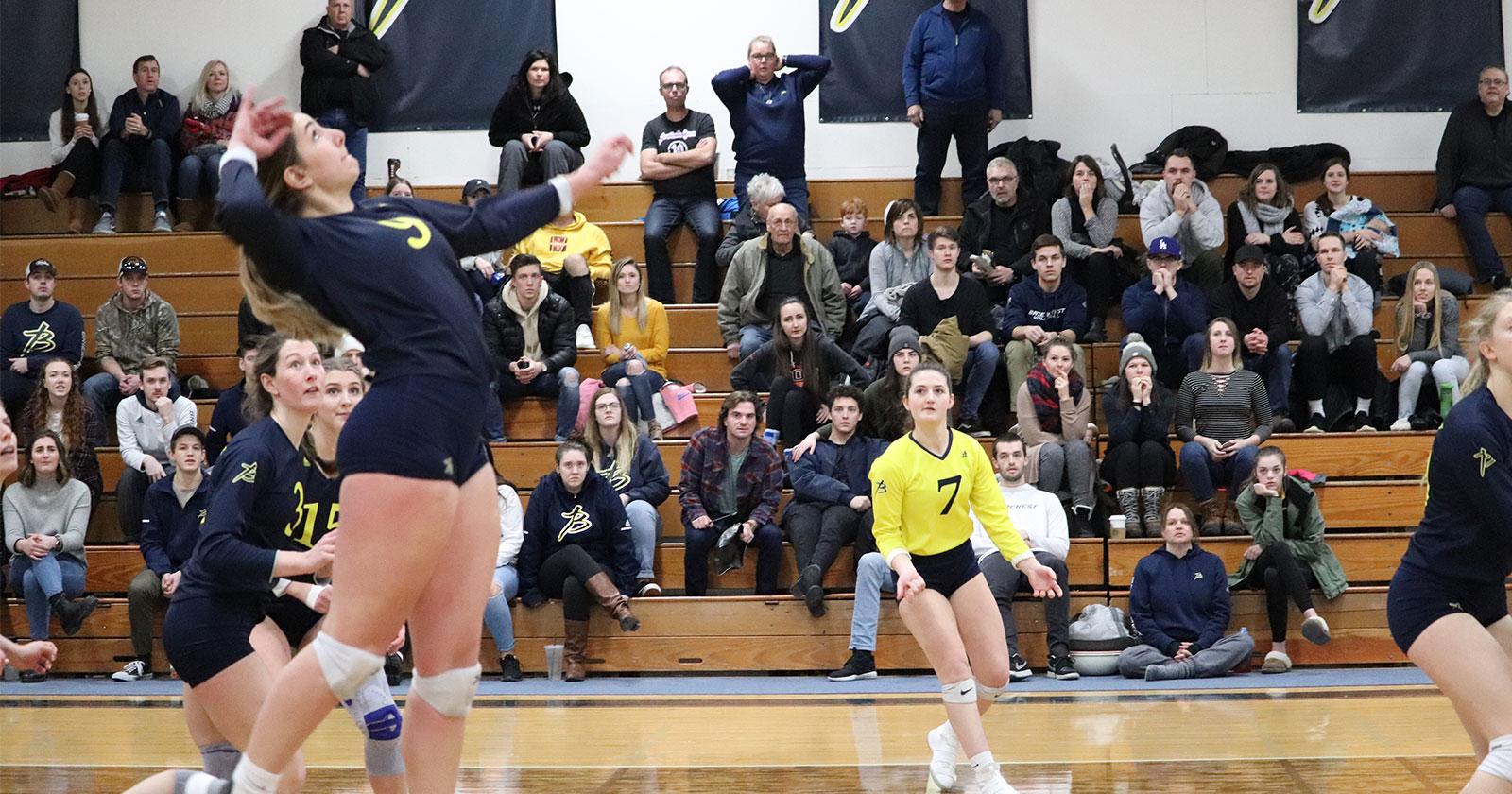 Welland, ON-In their opening match at Nationals, Briercrest faced RSEQ conference winners Cavaliers de Bois-de-Boulogne from Montreal, QC. Coming into the tournament ranked 6thoverall and placing 2nd in their ACAC conference earlier this month, Briercrest found themselves already behind two sets against Cavaliers de Bois-de-Boulogne who were ranked 7th coming in. While the women came back in dramatic 3rdand 4thsets, their efforts were unfortunately dashed when the Cavaliers defeated them in the 5th set (25-19, 25-14, 14-25, 20-25, 15-4).

In the first set, Briercrest and the Cavaliers kept it a tight match, exchanging points for the majority of the set. Contributing to their kills overall were #10 Mikayla Benterud (10) and #3 Becky Garner (15). However, the Cavaliers were able to take advantage of Briercrest’s missed serves and slowly inched ahead, taking a 4-point lead and ultimately winning the set 25-19.

The 2nd set began much different for the women as the Cavaliers took an early lead and didn’t let up. Briercrest’s #3 Becky Garner and #9 Mia Harder found some open court to put them on the board, but the Cavaliers’ precise passes and kills pushed them further into the lead. Hoping to impact the momentum of the match, Briercest made a few changes to their line-up near the end of the set, unfortunately the Cavaliers won the set 25-14.

What might have been their last set, the women came out with determination to stay in the match. Briercrest took the early lead and found their rhythm to capitalize on a few of the Cavaliers mistakes. As Briercrest took control of the 3rd set, they were able to dominate the Cavaliers and stay in the match, winning the set 25-14. A key contributor to the set was Libero #2 Kirsty Kindrachuk who achieved 20 digs overall.

Briercrest continued their victory into the 4th set, where they took an easy 4-1 lead which forced the Cavaliers to call a timeout to change their strategy. Unfortunately for the Cavaliers, they began to struggle with their blocks which bounced out multiple times to give Briercrest a comfortable lead. After hitting a Cavaliers player and bouncing out, Briercrest made a huge comeback victory winning 25-20 to force a 5thset.

The match took another dramatic turn though in the final set as the Cavaliers took a quick 7-3 lead over Briercrest. The women struggled to keep pace with the Cavalier’s new- found momentum and lost the set 15-4. Player of the Game for Briercrest was All-Canadian #4 Ashley Erickson who led the night with 37 assists.

The women were knocked out of the top medal round, but still have a chance for 3rdplace. Briercrest will be facing host team Niagara College today at 3pm (EST).